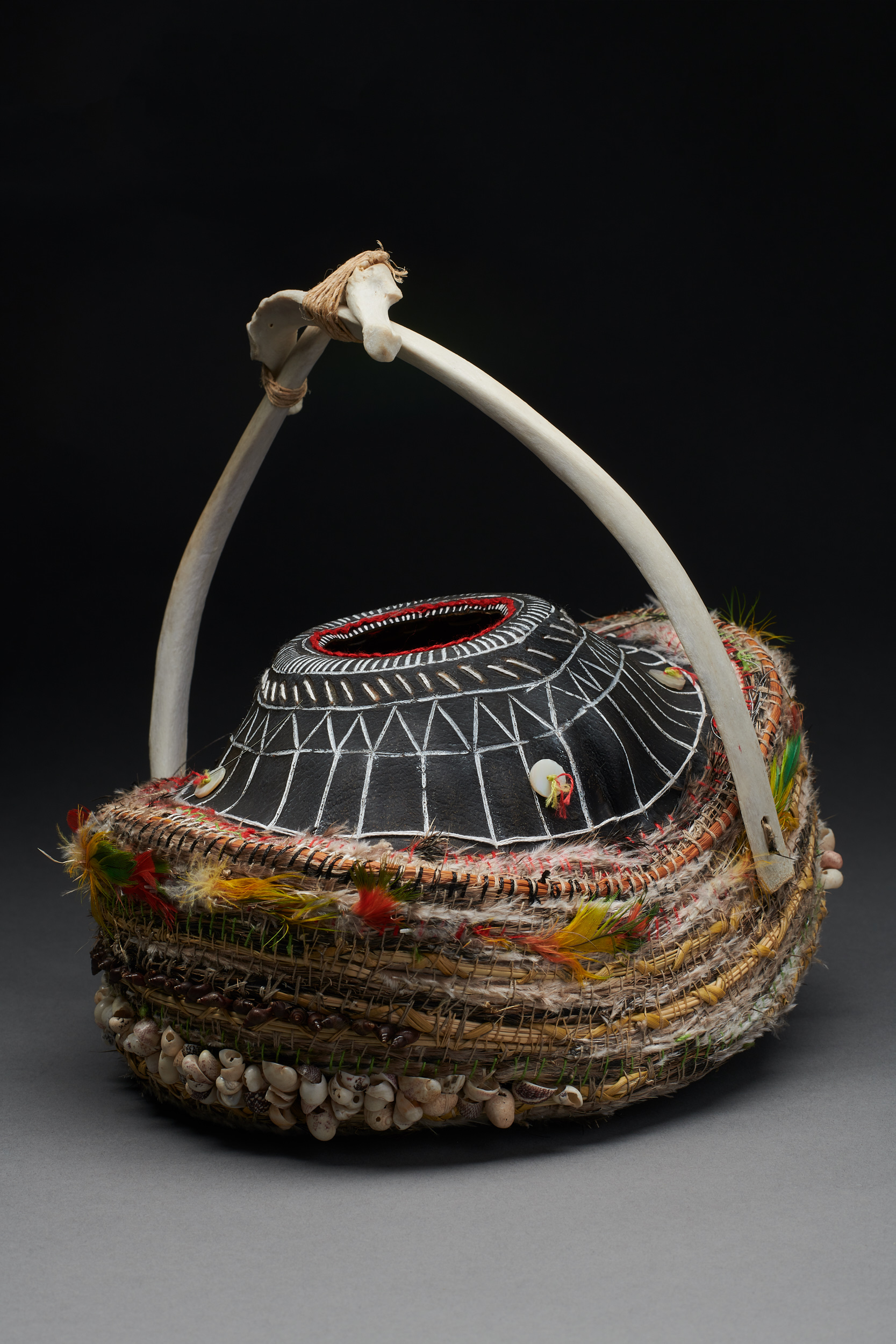 Inspired by this year’s 2018 NAIDOC theme ‘Because of Her, We Can’, this exhibition Sea HER Land showcases a rich quality and diverse range of works made entirely from natural materials by six of Baluk Arts’ key female Aboriginal and Torres Strait Islander artists. Exquisite works made from materials such as bull kelp, shells, bones, clay, wool, wood, assorted fibres, river reed and feathers honour mother earth and evoke memories of personal history. Each artist has a strong connection to the material they have utilised in their work, whether it be from the sea or the land. It is HER story, which has been cradled in the form of a vessel, to encapsulate the essence of protection and strength.

Sea Her Land emanates strong cultural ties to individual stories and complexed interconnections. Through the collecting of materials from places lived or travelled to, examining them, and finding considered new uses, these strong Indigenous women identify with their heritage and reclaim and reignite their innate cultural expression.  This collection of works explores both the protective and nurturing role of nature, and the ancient practice of using elements from the natural world to create diverse works as a rich expression of culture, identity and place that links generations together.

Working alongside these amazing women it has been an absolute honour to create works for Sea HER Land. Witnessing the evolvement manifest in these vessels has been a natural and magical progression unfolding before my eyes. The storytelling surrounding the creation of these pieces has been incredibly inspiring, connecting each of these women to their Country, their environment and honouring the locally sourced natural materials.  The colours, textures and materials magnified in these precious works demonstrates the multifarious and intimate connection all these women have with the sea and the land.

Tallara is a descendant of the Gudang (QLD) people of far north Cape York. Tallara is interested in exploring her experience of Aboriginal culture and family stories through sculpture and mixed media works. She has exhibited work at the National Trust of Victoria, was a finalist in 2017 Craft Award, and recently exhibited at Fremantle Arts Centre and the Art Gallery of South Australia.

Nannette is a Tyereelore Elder from Tasmania, and also has ties to the Boonwurrung/Bunurong

Beverley is Wirangu (SA) through her father’s side of the family. Bev was born in South Australia and moved to the Mornington Peninsula thirty years ago. Beverley is an emerging artist and enjoys working with a wide variety of mediums including ceramics, timber, stone and kelp. Beverley’s work was featured at the Darwin Aboriginal Art Fair, Tarnanthi Art Fair Adelaide, Mornington Peninsula Regional Gallery, Fremantle Arts Centre and the Koorie Heritage Trust.

Cassie Leatham is from the Taungurung / Wurundjeri people of the Kulin Nation (VIC). Cassie has developed a very strong connection to her country, and has extensively explored her heritage and is constantly looking to elders to help her with her journey of belonging and connection to her culture. Cassie has an incredible weaving practise and incorporates an array of traditional fibres and natural materials with in her unique weaving style. She has participated in many exhibitions and recently at present has a solo show at KHT. Her work has been acquired by National Gallery of Victoria.

Cassie facilitates workshops in a variety of mediums and specialises in native indigenous bush plants. It’s nurturing culture and heritage and respecting the land, the elders, the traditional ways that are most important to Cassie and most importantly nurturing the aboriginal youth who will one day become elders and become the teachers for generations to come.

Lisa was separated from her Gunditjmara (VIC) and Torres Strait Islander (TSI) family at a young age. Lisa has developed a distinctive weaving practice and her work is usually made of many layers that symbolise reattaching layers of history and story to reconnect to her heritage. Lisa is a finalist in this year’s 2018 Telstra NATSIAA’s, and previous finalist in 2017 and 2016. In 2017 she was a finalist in Craft Award and her designs were featured at 2017 Melbourne Fashion Week. Lisa has exhibited at Vivien Anderson Gallery, National Trust of Victoria, and produced a woven commission piece for the Koorie Heritage Trust. Lisa has had work acquired by NGV, Mornington Peninsula Shire and numerous councils and collections in Melbourne. She has recently exhibited work at Fremantle Arts Centre and the Art Gallery of South Australia.